In partnership with Adventist Health White Memorial (AHWM), the TELACU Education Foundation recruits primarily bilingual and bicultural nursing school students to participate in this comprehensive program. In addition to receiving financial assistance to cover books, tuition, and living expenses. Through personalized case management, Program participants are provided with a support system and broad spectrum of services which include: professional development seminars, one-on-one counseling and guidance, the Kaplan NCLEX-RN preparation course, résumé building and interviewing skills coaching. A full 100% of participants not only graduate, but also achieve Registered Nurse (RN) licensure.

With an understanding that cultural norms and practices significantly impact health-seeking-behaviors, this training includes effective methods of facilitating provider-patient communication. Provided by PALS for Health, the training offers an interactive overview of topics including but not limited to gender, generational differences, health literacy, traditional healing practices, various cultural customs, and cultural humility.

Provided by PALS for Health, this highly effective training is designed to prepare qualified individuals for the field of health care interpreting. It provides participants with the theory, concepts, and skills associated with interpreting, as well as with an overview of the California standards for interpreters, including ethical principles, protocols, and guidance on intervention. Participants engage in simulated interpreting sessions using accurate medical terminology. Successful graduates of the training receive a certificate that adds valuable prestige to their professional’s resume.

Upon completion of the Program, AHWM hires graduates to serve in high acuity units. Today, these professionals comprise about 25% of the Hospital’s nursing staff and 30% of RN Spanish-language interpreters. Quickly becoming part of AHWM’s caring culture, they enhance the quality of services and help shape policy through service and leadership positions on the Hospital’s numerous committees. As Department Charge Nurses and Preceptors, Program graduates mentor and educate nursing school students at the Hospital. Additionally, these nurses are consistently recognized by various medical organizations and the Hospital for their exemplary contributions to the field of nursing.

For a growing number, achieving their RN licensure is but the first milestone in their rewarding educational and professional journey. Recognizing the value of improving patient care, safety and outcomes, AHWM provides graduates with exceptional opportunities for advancement, including encouragement and support to pursue advanced degrees. The Program’s personalized case management continues through these advanced degree pursuits, and those interested in leadership and management positions are placed on specific tracks within the Hospital.

Violeta Lewis, a Program graduate working in White Memorial’s Pediatric Unit, went on to earn her Bachelor’s and is currently pursuing a Master’s in Nursing. Like so many TELACU Scholars, her commitment to service extends far beyond business hours; not only does she care for her patients, she now cares for the entire City of La Puente as its new Mayor!

Elba Espinoza, a Program graduate working as a Cardiology Nurse Practitioner with Adventist Health Physicians Network is the first TELACU Alumna to become a Family Nurse Practitioner. She began her career at White Memorial nearly 30 years ago as a Clerk, but she was determined to serve her community on a deeper level. With encouragement from the Hospital and her colleagues, she achieved her dream of higher education and now helps heal the hearts of patients with cardiovascular disease. 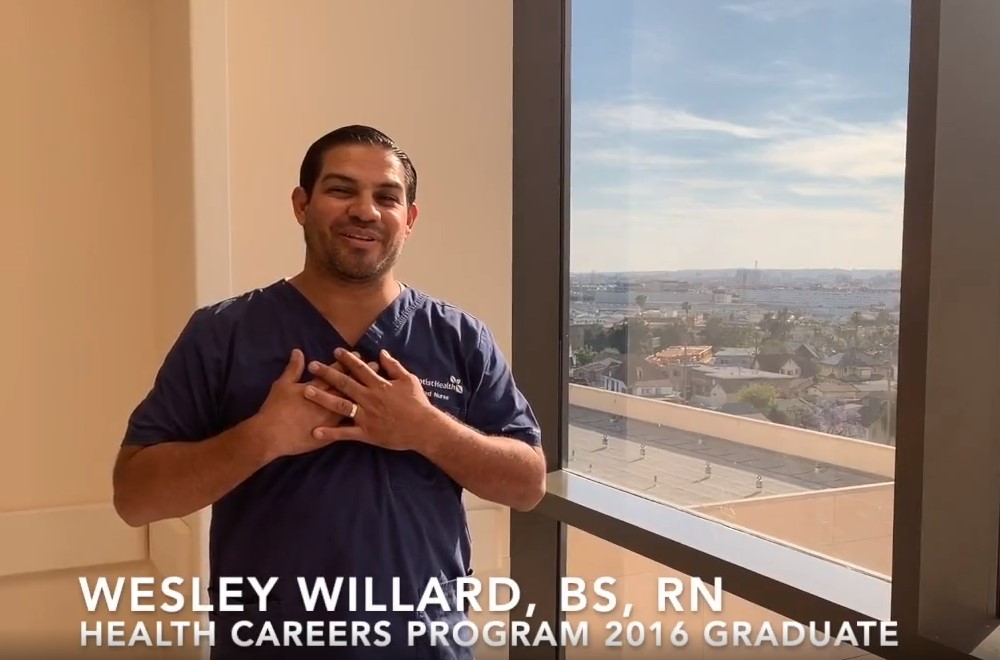 Alum On the Frontlines Video

While attending Cal Poly Pomona to attain his Bachelor’s of Science degree in Chemistry with a concentration in Chemical Science, Louis worked as an oral surgery assistant. Realizing that he was happiest when interacting with people during his work hours, he decided to become a Registered Nurse (RN).

It was then that he was accepted into the Rio Hondo College Nursing Program. For the next two years, Louis maintained a competitive GPA, worked part-time as an oral surgery assistant, all while taking care of his family. During his time at Rio Hondo College, he was elected Treasurer for the Rio Nursing Council and was awarded several scholarships due to his academic success and community involvement. He then applied to and was accepted into the TELACU/White Memorial Medical Center Health Careers Program, which opened many doors of opportunity for him professionally.

During his participation in the Health Careers Program, he completed the Health Care Interpreter Training in order to provide competent in-language care to the non-English speaking population. Additionally, through the Cultural Competency Training, he acquired the awareness, knowledge, and skills that equipped him to deliver a higher-level of care to the increasingly culturally diverse patient population.

After receiving a full range of valuable educational services, including professional development seminars, one-on-one counseling, and an NCLEX-RN preparation course, Louis successfully attained his RN licensure. He then received an employment offer at White Memorial Medical Center’s Intensive Care Unit (ICU), which launched his career as a Registered Nurse. To further enhance his career aspirations, he plans to earn his Doctorate in Nursing.

Growing up in East Los Angeles’ Ramona Gardens Housing Projects, Martha Romero lived not too far away from White Memorial Medical Center, where she would one day work. From a very young age, she knew that the gang lifestyle, which was rampant in her neighborhood, was not for her, and decided to focus on her education. School was her escape from the violent reality – by the time she graduated from high school, Martha had lost over 20 friends and family members to gang-related shootings.

It was around this time that Martha became pregnant with her first child. To provide a better life for his family, the father of Martha’s child enlisted in the United States Marine Corps. Tragically, two years later, when he was home on a short leave, he was killed in a random drive-by shooting during his welcome home party, leaving his family devastated and grieving.

Still, Martha was committed to her education in spite of these tragic circumstances. Facing a hectic schedule, emotional struggle, and the burden of supporting a family, Martha asserts that the turning point in her situation was when she received her acceptance into the TELACU/White Memorial Medical Center Health Careers Program. The Program not only empowered her as a student and as a professional, but by granting her a scholarship, it significantly alleviated many of the hardships she was facing, elevating her and her family’s quality of life. Participating in the Program allowed her to buy her own computer, meaning she would no longer have to stay late at school, and that she would no longer have to worry about where her family’s next meal would come from.

A 2007 graduate of the Program, Martha’s commitment is in direct alignment with that of the Program: alleviating the critical shortage of bilingual, culturally-sensitive nurses in the health care system. Her commitment and passion drew the attention of the former Adventist Health White Memorial President & CEO, Beth Zachary, who provided Martha with opportunities to tackle head-on some important issues that face the health care industry with former U.S. Congresswoman Hilda Solis, the California Board of Registered Nursing, and other influential forces in the State’s health care community.

Born in Montebello, Tanya Piazza always dreamed of becoming a nurse.  As a young single mother, she began working in the tomato and pistachio fields of the San Joaquin Valley, quickly learning that her wages were not going to be sufficient to support her daughter and also go back to school. Tanya began waitressing to pay for school and enrolled in the San Joaquin Valley College Medical Assistant Program. She worked for more than five years in the field, but never let her dream of becoming a nurse slip away.  When she learned of the nursing program at Rio Hondo College, Tanya moved back to Montebello and enrolled.

Tanya’s scholastic and professional achievements skyrocketed at Rio Hondo. In her first year, she was elected Vice President of the student nursing council, and elected President during her second year. It was during this time that she applied to the TELACU/White Memorial Medical Center Health Careers Program. She was accepted, and it greatly reduced the financial stress of supporting her family.

Tanya graduated from nursing school, received her RN license, and began working in the Emergency Department (ED) at While Memorial Medical Center. The Program’s one-on-one counseling, which continues after graduation, was a support system that Tanya continued to utilize to advance her educational and professional endeavors. Tanya then went on to graduate with her Bachelor’s in Nursing, and earned an invitation to the International Honor Society of Nursing, Sigma Theta Tau.

Tanya is an active leader both inside and outside of the hospital. At White Memorial, she has served as the ED Pediatric Liaison Nurse, Chair of the ED Unit Based Council, co-founded the first ED employee newsletter, launched the ED Pharmacy Task Force, and Preceptor for nursing students. TEF was very pleased to continue its support of Tanya’s educational and professional empowerment as she completed the Master’s of Nursing degree as a David C. Lizárraga Fellow.